After much anticipation and explaining to friends and colleagues exactly why I was  going to watch Ryton & Crawcrook Albion on a warm spring day, the first Northern League Day was here.  The fact that typing Northern League Day rather than #NorthernLeagueDay feels strange emphasises how the world of Twitter and the fine work of Michael Hudson and a multitude of other football bloggers brought the day together.

With the original plan of meeting fellow bloggers at Newcastle Central Station blown of the water by the wife’s quick trip to the shops doubling in duration, I joined the train to Wylam at the Metro Centre.  I wandered the length of the train in search of three blokes who looked like they were off to start drinking way too early and take in some random football.  It took me the whole length of the train before I stumbled across a group of three, one of whom was sporting a Perugia shirt from 1997 and another in the blue and black stripes of Chernomorets Odesa.  An educated guess told me I had found my companions for the day, but being the shy soul I am, I waited to disembarking before announcing myself as Mr @FootyRamblings.

A short walk from Wylam train station and we arrived at The Boathouse, CAMRA Pub of the Year in Northumberland.  In hindsight I probably deserved the ribbing I got for ordering Fosters and sporting a pink t-shirt.  What can I say, I was born in London, and lager is in my DNA.  After nursing my feelings we adjourned outside and after a false start of sitting in the car park, we found our way to the beer garden.  The introductions were given more depth and rather obviously the conversation wandered to football.  It was flowing well until we were door-stepped Danny Baker style by Andy Hudson’s electronic dictaphone and we all developed stutters and over use of the word ‘er’.

More folk arrived and a welcome arrival was the trio from Leazes Terrace who diluted the non-ale drinking contingent with their choice of Portuguese lager.  Bloggers arrived from as far afield as Yorkshire and London, and only a random police check prevented one blogger from coming from the West Midlands.  Once people got the hang of real world names rather than Twitter ID’s, things became much easier, and the banter flowed as well as the beer.

To say we lost track of time drinking alcohol in the warm April sunshine wouldn’t be too far from the truth, and at 2.45 someone pointed out that we were a mile or so from the Ryton Ground with kick-off fast approaching.  Luckily between the attendees there were enough designated drivers to ferry us up the hill to Ryton, which was a relief as it would have taken a lot longer than the 15 minute walk it was described as earlier.  We arrived at the ground and popped straight in to the club house to grab a quick pint, before realising that the shutters were to be pulled down to prevent us from watching the game with beer in hand.  The majority rushed their drinks and paid the bargain £5 entry to the man in the shed.  Once inside Kingsley Park we were greeted with a tremendous view of the Tyne Valley with Heddon-on-the-Wall sitting on the opposite bank of the river.  Ryton were clad in black and blue stripes, a la Internazionale (and Chernomorets Odesa of course) and Billingham Synthonia were decked out in green and white quarters, a kit described by one observer as an ‘eco-friendly Bristol Rovers’. 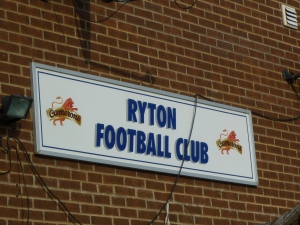 The main reason Ryton was chosen as the gathering point for the blogging fraternity was to boost their coffers toward the end of a difficult season for them.  At the beginning of the season Ryton were let down by a sponsorship deal and as a result lost all but one of their players.  Since then they have used over 60 players this season, a mixture of players from their own successful youth set up and some from the Northern Alliance, the competition that sits below the Northern League in the non-league pyramid.  As a result they have only won one game all season, away to Sunderland RCA.

Ryton had the best of the opening exchanges and took a 1-0 lead with a well placed shot in to the far corner from a tight angle.  This was soon equalised however after a deep cross from the Synners right found an unmarked man in green and white who nodded home from close range.  The first half didn’t see any further goals and the majority of the bloggers in attendance descended on the bar to top up the alcohol levels at half time. 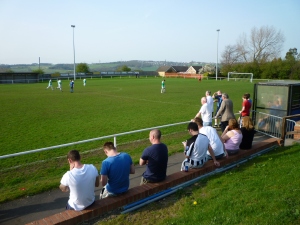 Between finishing my pint, chatting to the club secretary and watching Grand National (no winners) it was twenty minutes in to the second half before I took my place back in the sunshine, by which time Ryton had raced in to a 3-1 lead.  I was introduced to Mike Amos, the Chairman of the Northern League, and whilst we were discussing the success of the day, Ryton made it 4-1 and then 5-1 with debutant Chris McCabe rounding off a great day with a hat-trick.  The home side were now looking good for their first home win of the season, but it wasn’t to be that simple.  I watched on without the company of the aforementioned Mr Amos who I had scared off with talk of Premier League football, and the visitors pulled it back to 5-3 with James Magowan equalling McCabe’s achievement by completing his hat-trick.

Thankfully for Ryton time was up soon after the third Synners goal, and they had recorded their first home win of the season.  Alas they have long since been relegated to Northern League Division Two but a conversation with manager Peter Craggs in the clubhouse revealed that the club have successful youth sides of all age groups that suggest the future is not all doom and gloom.  What Ryton does need, along with the other clubs at this level, is the support of local football fans.  With a hotchpotch of football bloggers from around the region and beyond the attendance just topped 100, their third highest of the season.  Clubs at this level depend on gate receipts and match revenue to exist, and if this figure could be increased by even 50 per home game with each guest having a drink and a bite to eat, that would be an extra £10,000 in the coffers over a 20 home game season.  Events such a Socrates Ryton/Northern League Day help this, and a growing apathy toward the professional game at the top level may in time assist in increasing the numbers attending this level of football.  I am no bleary eyed optimist and I know that sometimes it can be freezing cold, dark and the football dreadful, but I thoroughly enjoyed an eight goal thriller on a good pitch with tremendous views and warm sunshine.  The players on view were real people who have day jobs (or go to school), not folk who drive to training in Bentley’s and Aston Martins and live in million pound mansions.

Back to the day in question, and a recurring theme was developing as we headed back in to the clubhouse again to get more alcohol.  The players from both sides were tucking in to chips, curry, rice and bread and butter, and our day was complete when as visitors we were invited to help ourselves to the food.  The curry had been decimated but a few of us still managed to put together a strange plate of rice, chips and bread to soak up some of the beverages consumed.

The day was extended for a few hardy souls who headed in to Newcastle to consume yet more beer.  I think the FA disciplinary committee would be stretched to deal with the amount of swearing in Andy Hudson’s recordings for the Northern League Day podcast, but all in all a great day, watching real football with proper football fans and spending less in the whole day than a ticket in the main stand for Newcastle v Man Utd. 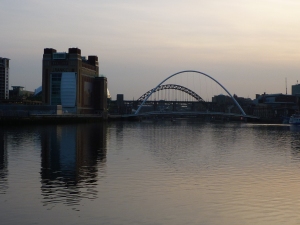